A DEVICE OF DETECTION ADAPTED TO AUXILIARY CRANE 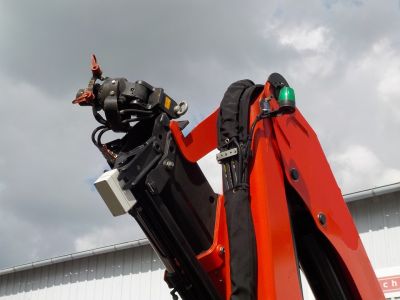 An antenna of detection for high voltage overhead electric lines

System of prevention which with a little antenna of detection placed on the boom of crane before telescope, indicate  presence of high voltage electric line around the crane with blocking of all the movements (forced function permite unblocking).

DANGER : threshold of detection signalled by visual and audible alarms - blocking of crane.
Distance from antenna to line 20kV integrate total movement of the crane and the 3 meters of safety.

Threshold of detection adjustable to installation

Threshold of detection is adjusted in factory and can be adjusted on site during assembling which permit to fix the volume of protection (distance of detection) according to use.

Situated on central processing unit around crane (when there is a continuous rotation) or on a separated box, outside visualization integrate forced function.
Remark: According to the kind of crane and with some conditions, forced function can be carried on the Radiocommand.

Assembling on any kind of crane

As well for a crane situated behind a cabin as for a cantilever crane (behind a plateau) and crane with continuous rotation.

Options:
- possibility to add a flashing light or to connect an existing flashing light to signal around vehicle, the presence of Danger.
- second theshold of detection MEFIANCE - without blocking for the movements of crane.
- additional carry of forced function.

We call you back