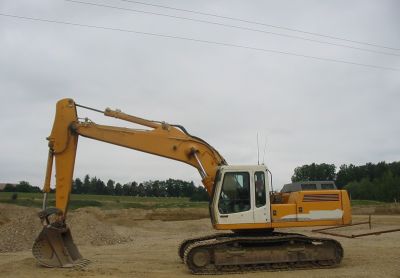 DECTRO 500-PH2 is a device of detection evolution which permite to select, with a switch composed by a key, detection of 2 types of lines (distances adjusted to installation).

In standard (without key), it's detection of line 20 kV which is selected.

In specific, (with a clé - validated by the head of site for example) it's line 63 kV which is selected.

This choice is necessary for only one antenna of detection.

An antenna of detection for high voltage overhead electric lines

System of prevention which with a little antenna of detection placed in the end of boom before pole, indicate high voltage overheas electric line presence around excavator with blocking of all movements:
- without Forced function: we autorized to down
- with option Forced-function: we block all the movements, we can get going again by a support on the push button situated on a box of visualization in cabin.

Assembling on all types of hydraulic excavator

Options:
1- possibility to add a flashing light or to connect an existing flashing light to signal around excavator, the presence of Danger.
2- Forced-function by a push button (only one button for the two lines).

We call you back